When I drive thru the town of Port Orford, I am elated. There are no fast food restaurants, no big box stores, no Starbucks. Nothing flashy to grab your eye. In fact, if you drive thru here on a Sunday or a Monday, you might think it’s a ghost town, where seemingly, no businesses are open except for the all-day breakfast place, the gas station and the supermarket. . .just a bunch of store fronts, some of them empty. But if you drive thru and don’t stop, you are missing one of the hidden treasures of the Oregon Coast and possibly the heart of Port Orford: Art Galleries and Studios, of which, there are now nine. With an official population of 1,190, and only 1.56 square miles of land area for the town, that is a notable concentration.

I read that it was voted #4 on Travelocity’s nationwide list of 10 Best Small City Road-Trip Destinations and located about halfway between the California border and Coos Bay, Oregon, with an enforced 30 mph speed limit, you must drive slowly, but be alert and take note. Everywhere you look there are wall murals, canvasses hung on fences and fences as canvases, even a unique, mosaic lookout at which to view the southern coastline and sea. Plus, there are one-of-a-kind, whimsically-painted fire hydrants, which received honorable mention in the Oregon Main Street 2017 Best Image Campaign Award. And all of it sandwiched between the forest and the ocean.

The town has been designated an Art and Culture District by the City Council which is most appropriate for such an exceptionally creative community of artists, sculptors, photographers, writers, poets, musicians, dancers, singers, artisans and craftspeople. In the past several years new artists have moved into town, setting up galleries to showcase their work. What is it that draws them here? Perhaps it is the very thing I felt when I visited and decided to move here, mysteriously inspired to write. A creative vortex? Or, perhaps, it is the community itself, which has been described as independent and iconoclastic, even eccentric. It is friendly and inclusive, yet people have space and the freedom to just be themselves and allow their creativity to flow. I met a young man here, the latest addition, drawn here from the east coast by a confluence of inexplicable events (otherwise known as coincidences) that convinced him this is where he wanted to create his art: magnificent glassworks. Surrounded by the sea and the beauty of nature, he felt grounded here, standing upon Battle Rock. Instantly, he knew this was home, where he wanted to explore his creativity and discover new ways to work with glass. A self-described Paleo Osteo glass artist, inspired by nature, he creates extraordinary, anatomically accurate animal skulls and fossils out of glass for museums, galleries and collectors, among other things. 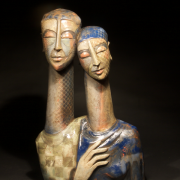 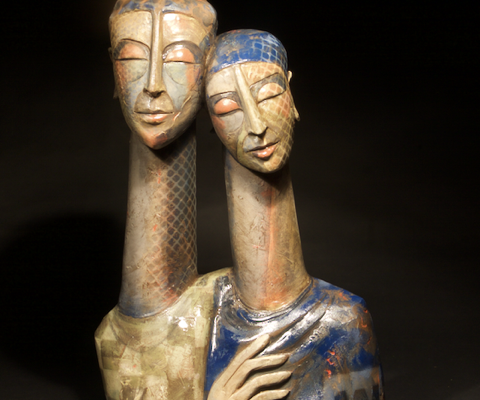 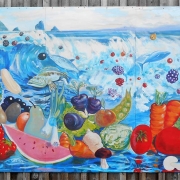 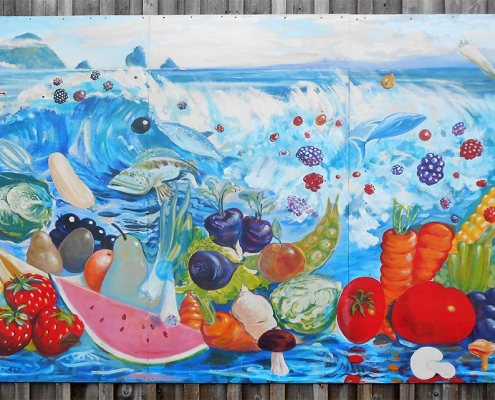 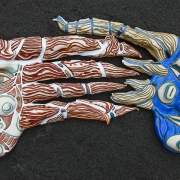 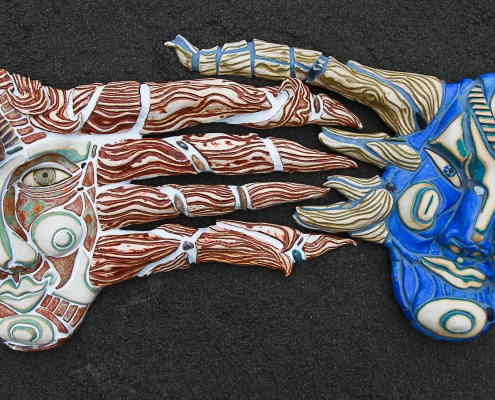 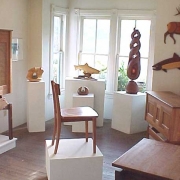 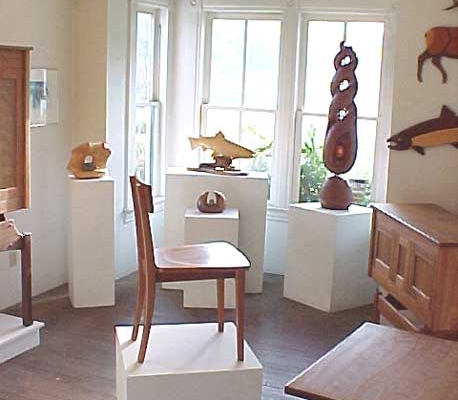 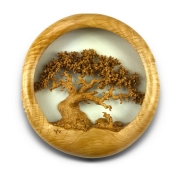 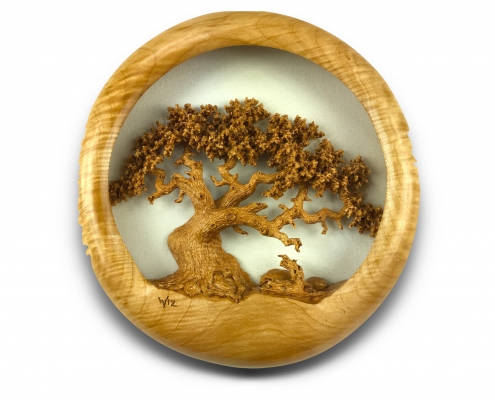 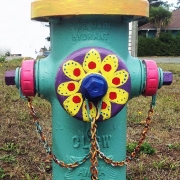 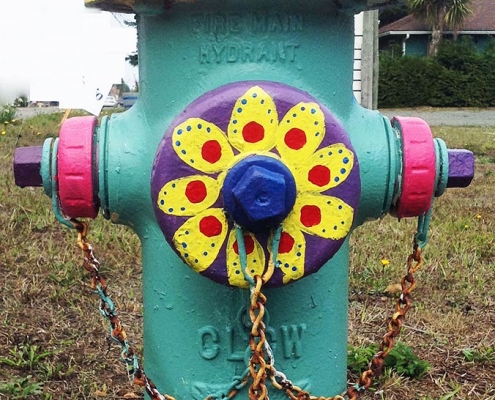 It is a conservative town of working-class people, a fishing village really, with its dolly dock and port at its core. But when I asked Rick Cook, of the longest-opened Gallery of the same name, why he came and why he stayed, he said he came to be by the sea, but also because the town felt quite liberal. For a man with a long ponytail, he felt no judgments here. From a long line of woodworkers (the Cook ancestors plied that trade in England), he found fine woodworking his creative outlet, and inspired by Scandinavian design, set up shop here. That was 1980, and his gallery remains one of a kind in Curry County, where he still makes and displays his coveted accent tables and cabinets, each unique in its creation.

On a recent Saturday, I took a tour and was overwhelmed by the splendor and variety of art I saw: from the traditional oil on canvas to the outrageously modern drawing on a computer screen. From a compelling triptych of faerie foxgloves to a majestic horse carved from a solid piece of caramel colored wood. . .suspended-in-air blown glass jelly fish with their tails trailing, as though swimming for the surface. . .a driftwood man named GIANT who is rumored to be getting a dog. . . a series of black and white prints called Wind Map, that was so remarkable it was featured in the New York Times Sunday Magazine. . .Encaustic paintings made from hot beeswax and perfectly spherical cauldrons made from colorfully patterned, laminated paper. I found myself surrounded by an explosion of creativity that captivated me and made my spirit soar. Oils, sculptures, mobiles, new media prints, mosaics, furniture, wearable art and every imaginable medium: glass, wood, metal, ceramic, paper, cardboard, rocks. From the sublime to the fanciful; from the mesmerizing to the bold, the serious to the fun, all of it matches my definition of art–that which sprung from someone’s imaginative center, and as Oscar Wilde wrote: “Art is the most intense mode of individualism that the world has known.” 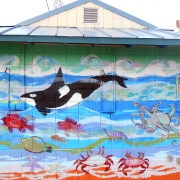 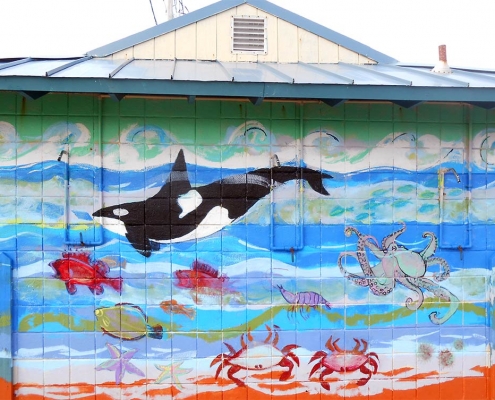 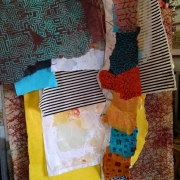 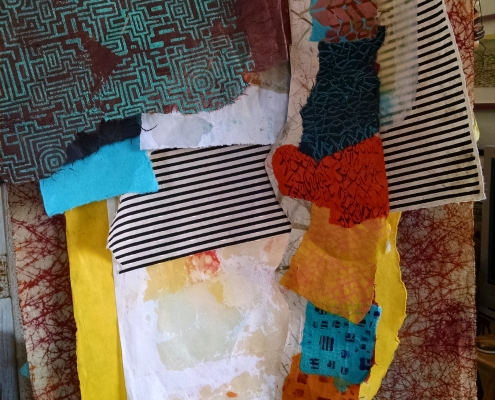 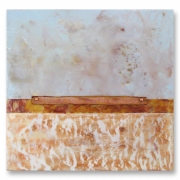 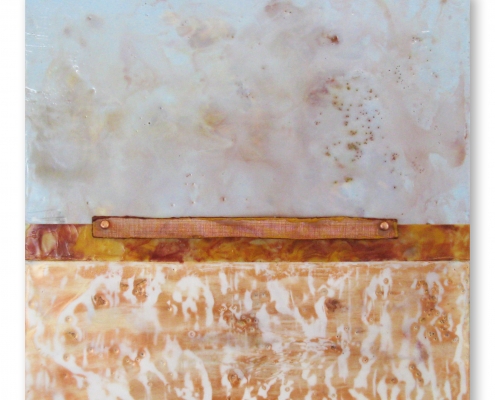 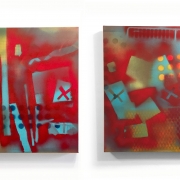 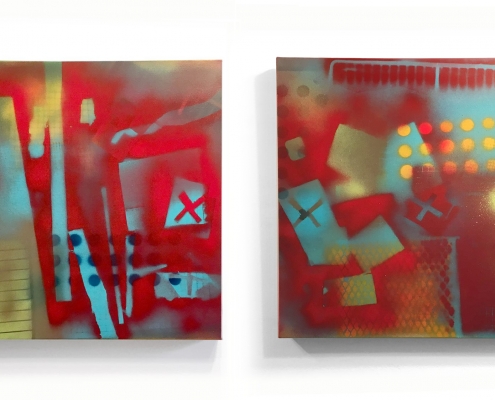 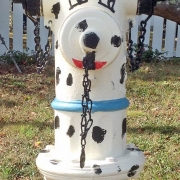 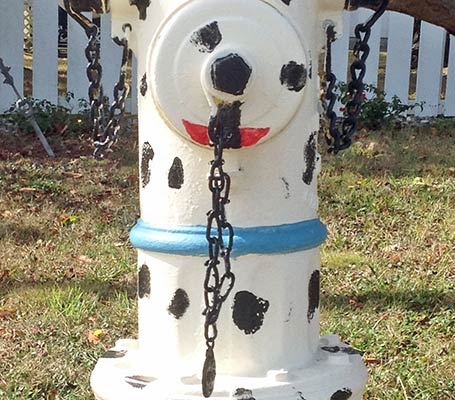 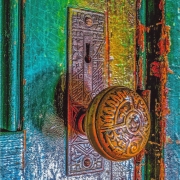 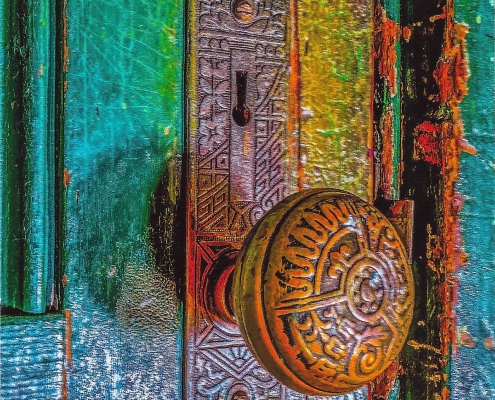 As I walked thru the different galleries, I was reminded of the Tony-award winning Broadway play “Art” which I saw, not so much to pursue the age-old philosophical question of “what constitutes art?,” but more for the acclaim and the all-star cast (Alan Alda, Victor Garber and Alfred Molina). The plot centers around a wildly expensive piece of art prominently displayed in the main character’s apartment, that at first glance is a solid white canvas with several diagonal brushstrokes. An argument ensues. One man sees a virtually blank canvas, another sees a man dashing through space and disappearing. While this complex play is about far more than just “art,” I remember one point: like beauty, art is in the eye of the beholder. Whereas you may prefer one medium or subject matter over another and your trip-mate may be drawn to something else entirely, there is something for everyone here in Port Orford. The scope of the art found in these unpretentious shops is astonishing.

There is art here for every budget and none of it gift-shop tchotchke, all of it hand-formed and borne out of the depths of local artist’s creativity. Yes, you will find pieces from an artist from Portland or California, but the bulk of the work here is local. Like the sensual wood carved hearts from the Tree Wizard Gallery (which is also his studio) to the beguiling Rosaries made of rare gemstones at Strange Angels. Or, the extraordinary three-dimensional mosaics at Good Feather Gallery, to the eclectic shadowboxes and hand-painted journals at Not Just Art, or the handcrafted furniture pieces at the Cook Gallery. Marvel at the craftsmanship of melding handmade paper and natural ingredients into remarkable sculptures at Laughing Baskets Studio. Interested in digital photography or new media? Point.B Studio is the perfect stop.

The largest and the most expansive is the Hawthorne Gallery, where you are welcomed by a courtyard filled with lush shrubbery and metal sculptures, including several with soothing water features. Once inside the doors, you are awed by the breadth and variety of art mediums for the wall, the floor, the ceiling, the shelf and the body. You are surrounded by a curated display of art in all shapes and sizes, and whether you are there to buy or just to look, there is something to please every eye, awaken your sensibilities and connect you to something that no words can describe.

The most recent venue for experiencing art is the A-frame in Buffington Park, where the Port Orford Arts Council is headquartered, uniting this community by organizing and supporting cultural events, like art classes, movie nights, author readings, and musical performances all in a fun, party-like atmosphere. There are local artist works on display along with the Book Showcase featuring the town’s seven published authors.

New York City may have its Museum Mile, but Port Orford’s Mile of Art is an attraction not to be missed. Nine stops in which to be enthralled, astounded, intrigued, even entertained. There are periodic Art Walks, when all galleries are open at the same time. Or on any weekend in the summer you will find the galleries open or available by appointment. Just stop in any local business and pick up a Gallery Guide for hours of operation or a phone number to call.

If someone were naming this town today, they might call it Port Artford!